This one’s a little political.

Actually, it’s almost completely political. If you have an interest in US politics, then read on…

That was an actual conversation I had with a voter in California from my living room in Melbourne 5 days before the recent California senate primary.
How is everyone? It’s been a while since my last entry, but some of you will know that I was on crutches for 9 weeks (my calf muscle was torn from my Achilles tendon). I was off work and feeling pretty down. Other than my rehab, I couldn’t really do anything active. Following the news and watching movies was pretty much it. With the Orange One in power, US politics has taken on a whole new significance. Watching The Young Turks, and following the Justice Democrats, I had donated money to all of their candidates, as they are principled and not corrupt, representing the only major cohort of candidates who might actually oppose him on policy (as opposed to being the outrage police), as they’re not owned by corporations.
I got an email from one of the organisers from California saying that they couldn’t accept money from me as I’m not a US resident, but if I wanted to help, I could volunteer to help on the campaign. California is a little far from Australia for me to knock on doors, but they seemed very happy for me to be on their phone banking team. I thought to myself- well… I’ve got lots of free time… I’ve got hours of free international minutes that I never use.. why not? After all- there are only so many Seinfeld episodes you can watch before you start going stir crazy. [“NO SOUP FOR YOU!!!!” ]
I remember watching a Daily Show sketch about political slacktivism and thinking “you know, Victor- you’re actually as guilty of this as a lot of people”. Expressing outrage and posting memes on Facebook might make you feel better for a moment, but in effect, you’re only reinforcing the views of those who already agree with you, and further entrenching those who don’t. The invitation to phone bank was an opportunity to actually do something constructive, and elect someone who is principled enough to bring about real change to America and the world. It would beat fossilising in front of the TV, anyway.
[Although- having said that, this one was just too good not to share; my sister was at the anti-Trump protests in London last weekend, and even despite the swearing, I have never been more proud to call London home:The icing on the cake for me is the timekeeper in-between each chorus shouting “FIVE, SIX, SEVEN, EIGHT!!!”]

I met the candidate and her team on their web forums, and got straight into it. I would call for 2-3 hours each morning (evening their time), speaking to voters, encouraging and informing them to come out and vote for my candidate. To be honest- it was varied in terms of how receptive people were. Some people would hang up on you. Others were just not interested, and a minority were just plain rude, and it really affected some of the other members of the team. I didn’t let those episodes bother me, and sent the group some words of encouragement: 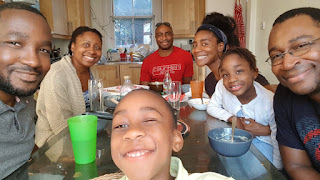 The week in London flew by, especially with the World Cup being played- my 9 year old nephew Nathan loves football, and is actually really good at it. I took him to pick up his player of the season award for his club 😀 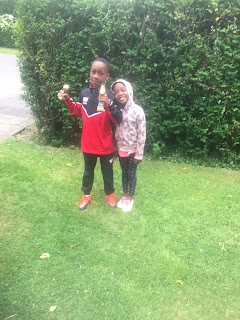 I actually didn’t realise that one of my schoolfriends works as a doctor in Orange County, so I stopped over in LA again on the way back to see him. Hiren and I both did physics, chemistry and biology together before going to medical school, but we hadn’t seen each other in over ten years. He’s married with 4 kids, living in an amazing house in the OC- life is good for him, but he appreciates that for most people in the US, it isn’t. 50% of people make $30,000 per year or less, and 44% of homeless people have a job. It’s the land of the free. If you’re rich. I hardly saw any homeless people when I was working Bavaria last year. And the few that I did see were blatant scammers from overseas [I’m sorry- if you’re wearing nicer clothes than me, you’re not homeless…] 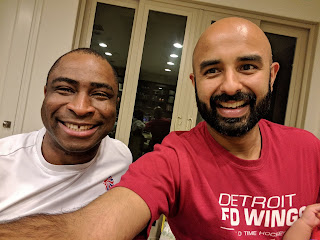 Of course we reminisced about all the craziness we got upto in class, and how surprised we were to have graduated given all the joking we did. We laughed so much, I think we irritated his wife a bit (sorry!). My eyes are puffy in the photo because I spent half the night wiping the tears ways from them- and we didn’t even make it on to the Simpsons quotes…
In essence, we’re still seventeen. A part of me will always be seventeen. Actually, screw it- most of me will always be seventeen, but I think I can be serious when it’s necessary.
[but only when necessary]
June 26th saw another primary election in New York in which another Justice Democrat , Alexandria Ocasio-Cortez was taking on an establishment giant, rightly known as Corrupt Joe Crowley. Alison had the idea that her team in California help out Alexandrias team in New York, and again I agreed to make calls for her. I still wasn’t able to work, as I had only just come off crutches, and was limping quite badly, so it once again made sense to use my time productively. I spent another week churning through phone numbers from my living room in Australia, again enjoying getting americans to believe that I was also american 😉 New York was a little tougher, as East Coast people are nothing like as laid back as people in California- at least nobody in California swore at me “I AIN’T VOTIN’ IN NO F@#KIN’ ELECTION!!!!”. Yikes….
Again, I was on the phones for 2-3 hours a day. Abby thanked me for making so many calls, and I explained to her that I don’t see hard work as an obstacle- in fact, in a way, hard work is actually the easiest thing in the world: you have a pile of work in front of you; you do it; it’s done. There’s nothing really to figure out. What is technically difficult is strategising and figuring out a path to success- that’s what the organisers do, and I don’t envy it. I was more than happy to be a foot soldier.

Watching the poll results come in online was nerve-wracking, as it was with Alison, but Alexandria started out with a narrow lead and this grew and grew as the polls closed, and in the end, she won by 15%, which is massive. This sent shock waves through the political landscape, as she had just come from nowhere to knock out the 4th most powerful democrat in the house. This represents real change, and I was thrilled to have been a part of it. Anyone who’s played football with me at school would know that when I celebrate, I don’t hold anything back (if you thought I was running quickly BEFORE scoring the goal….), so naturally the Tardelli celebration had to be done…

[It’s the most famous celebration in football]Alexandria will probably never know that I was on her team, but to be honest, I don’t really care. I just care about progress and having principled people in power who can effect positive change both domestically and globally. I’m hoping that this is just the first step in a long line of progressive victories.

Until the next time.
Victor.
2
SHARES
ShareTweet